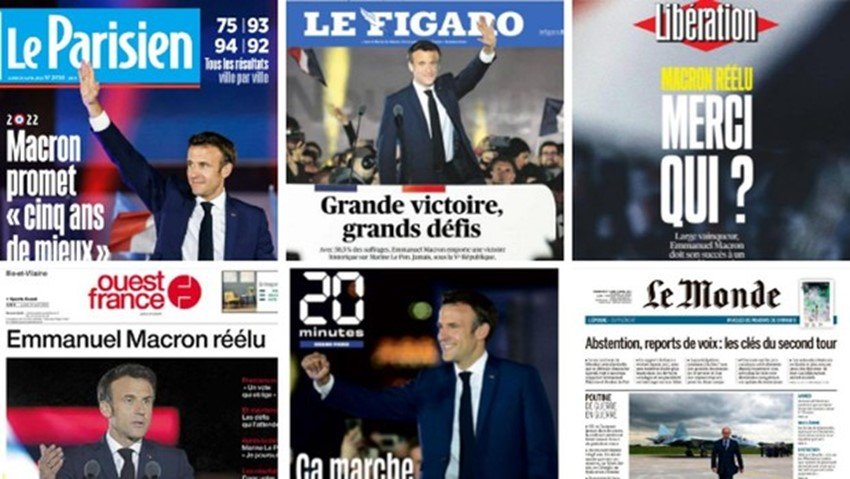 The French press illustrated its front pages this Monday, how could it be otherwise, highlighting the victory of Emmanuel Macron in the presidential elections, although emphasizing the loss of support, the growth of the extreme right and the enormous challenge that the centrist faces. forward to rule for the next five years.

The newspaper ‘Le Parisien’ headlines that “Macron promises “five better years””, accompanied by a full-page photo of the president at the celebration last night at the foot of the Eiffel Tower. ‘Le Figaro’, meanwhile, opts for a “Great victory, great challenges” and accompanied by a forceful editorial entitled “And now we must act.”

The newspaper ‘Libération’ opens with a “Macron re-elected, thanks to whom?”, where he justifies the victory of the president thanks to a mobilization of the French to prevent the extreme right of Marine Le Pen from winning. ’20 minutes’ headlines with a “Still works” making a play on words with the name of Macron’s party and ‘Ouest France’ bets on a sober “Emmanuel Macron re-elected” and an opinion that reads “Reconcile the French…and fast.”

The printed edition of ‘Le Monde’ this Monday, the best-selling newspaper in France, is the same as last Sunday’s, where it offers a preview of the elections emphasizing the high abstention rate. However, in its digital edition it opens with a “Re-elected Emmanuel Macron”,